Hey guys! Thanks for checking out my version of the simple ‘tic-tac-toe’ game.
This is the first app I’ve ever made in Kotlin (Android Studio)  and would like to tell you a little bit about how it works.
Just incase you didn't land up here after trying the app, you can download the apk here.

So, how does it work?

This is how the 'sweet tiny algorithm' thinks-

And surprisingly, that's all that the comp does to defeat a human opponent in almost every match!

As you may notice, The last two points are practically useless for the first move, since no one can win in just two moves.

But after playing my app a couple of times I realised its pretty easy to defeat the computer unless you are playing with your eyes closed. So, after a little brainstorming with my mom, I came up with certain best moves for the computer to play in the first few chances, like-

Over time I’ve come up with a few more of such ideas which make the computer almost invincible.

If you are able to repeatedly defeat the computer using the same strategy, and know what can make the computer immune to it, please do tell me !

I do plan to share the entire code, but since there are a whole-lot of codes better and simpler than mine on the internet, I’d have to clean my code to make more readable before sharing it to the internet. 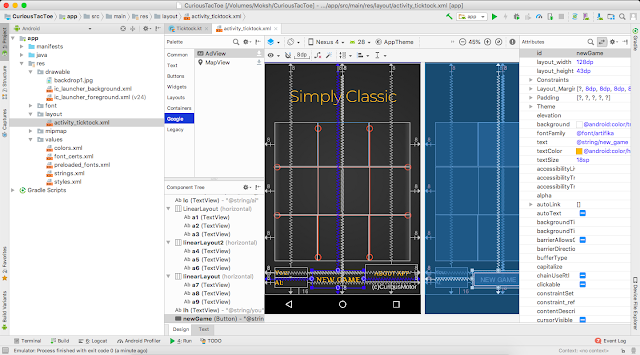 All in all, its fun making games and apps using Google’s legendary software- Android Studio. I'd love to get some feedback on the app, there's a comments box just below!😃

December 07, 2019
If you are into DIY guitar pedals and want to start designing your own effects, this article might help you open a few doors. I write this article as an EE student who earlier struggled with understanding these circuits and would often simply copy schematics off the internet.

This article is intended for-
1. Absolute beginners who like tinkering with electronics
2. Anyone who has been learning analog circuits and is looking for a jumpstart project.

Also before I start I'd like to mention, for anyone who wants to get a rock-solid foundation in Analog electronics, I highly recommend reading the book, 'Electronic Principles' by AP Malvino and David Bates.

Distortion Pedals come in all flavors and sizes, however, how the distortion effect is achieved in any of the pedals is more or less similar. Let's first see how the output of the pedal compares to its input.

The raw signal coming from the guitar is first amplified a little, and then the peaks of the amplified signal are clip…
2 comments
Read more

But that's not what Tinkercad is famous for. It offers an amazingly easy to use 3D design tool for Makers, once again in a simple 'Drag and Drop' interface! You can directly download the CAD file, once you're done designing. If you've ever thought of making your own uniqu…
Post a comment
Read more