October 15, 2017
This article is updated every week, with new ongoing developments in the project.
If you like to open up old electronic appliances to see what's inside, and salvage a few useful components, this article is for you. In this article, we are going to learn about the basic idea involved in converting an inkjet printer into a plotter.

Project overview- There's next to no difference between the mechanism of movement in inkjet printer and a RC Car. So you don't need any prior experience in Arduino.
Here's what the project looks and works like, so far-
As every printer does not contain the exact same setup of components inside, we'll be talking about the general idea of what is to be done.

Things you will need-
1. An old inkjet printer (Obviously)
2. Arduino Uno
3. L293d Motor shield
4. Joystick Module
5. A push button and a 330 ohm resistor
6. 12V 2-Amp DC Power supply
7. A 9g Servo motor
8. Ingenuity
9. Tenacity
I already had the last two, however you might want to order them from amazon if you don't have them😀

1. To start with, as you open the printer you will come across lots of parts that won't be needed for this project. What you need to look for is two modules-
Rest isn't needed for the project. 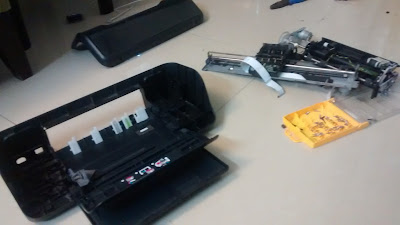 The modules mentioned above (Top right)
Both of them simply consist of a motor and some mechanical structures facilitating the movement of the carriage.
Make sure you pull out all the ink pads present in the printer before dismantling deep!
2. The mechanism that pulls the paper in from the feeder allows the paper to only move in one direction (that's pretty much why you never see the paper moving reverse in the printer). So we will have to remove the entire paper feeding mechanism  and insert the paper manually from the rear.
3. Don't be afraid to cut out the unnecessary plastic, acting as an obstruction in your project, especially that part that will be holding the servo.
The cartridge holder can be easily pulled out, I realised this after a lot of attempts to cut it off. 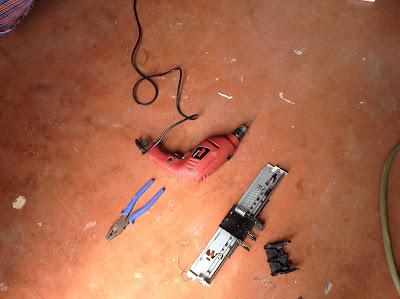 4. Setup the the circuit, and upload the code as below-
THE CIRCUIT DIAGRAM-
THE ARDUINO CODE-


The above code is the basic code to control the movement of the carriage and the paper using the joystick.
Experiment all that you want to!
You can also write codes for drawing a perfect shapes like square or circles, at the press of a button. I will be uploading the codes for the same on this article soon.
To read further updates on the project subscribe to this blog to get notified at every new addition.